"Empire of Night: New Dawn" is an online GURPS campaign about diplomacy, quests, and battles, set during the rebellion of an oppressed peasantry against an evil empire.

Centuries ago, valiant heroes strove to defeat the Dark Lord Karsen. They failed, and his dread empire conquered the civilized lands. Hundreds of uprisings and rebellions have been launched against Dread Emperor Karsen, but he and his minions have triumphed over them and launched savage reprisals. These days, the Resistance consists of little more than scattered cells, training in secret and hoarding their last few weapons of war.

Rumors speak of great events: turmoil in the capitol, including the death of Karsen himself at the hands of his lieutenants. It is said that brave souls in the Isenmarch have successfully slain the governor there, and once again free men administer their own lands. If the Resistance has succeeded once, it may succeed again. You and your comrades are brave, cunning, and determined. Can you overthrow the Shadow and make a new dawn for freedom?

The group usually meets online on Thursdays from 5:30 pm until 9 pm Central Time (USA, GMT -600). Lurkers are welcome and should contact Mark Langsdorf, the GM, at mark.langsdorf@gmail.com for information on how to get in on the game.

The Empire of Night spans the known world, and the Resistance has no reliable knowledge of any lands free of its tyranny prior to its current rebellion. From humble beginnings in Engenstut County, a minor province of the backwater of Hanist, the Resistance has successfully rebelled. There are now Liberated Lands and the focus of campaigning has shifted from southeast Hanist to the entire eastern theater of war: 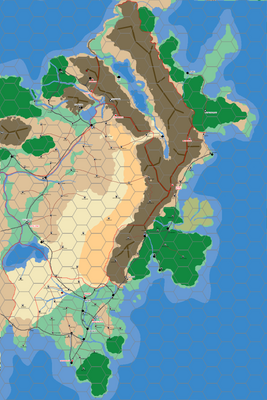 Magic is an important part of the setting. Magical phenomena are common, and magic influences the courses battles and the destinies of nations. Since the breaking of the first God Ward, magic has become more unstable.

Weather is also an important part of the setting. Rain and snow can delay attacks, hinder or ground flying units, and have other unpleasant effects.

There are some Miscellaneous World Details that don't fit anywhere else.

An intermittently updated review of the history of the game.

Who fought where and when, intermittently updated.

Noteworthy enemies and their fates.

A record of interrogations of significant foes.

Resistance Goals
A listing of the Resistance's current and past objectives.

A list of current questions that need to be investigated, along with the known amount of data about them.

City and Army Tracker
A spreadsheet for tracking population centers that the Resistance controls and their armies.

Rules References
The official and optional rules that are in use.

I'm going to post some initial setting information here on the wiki. Beyond that, nothing -- you guys will have to discover the rest in-game. If you want to use the wiki to take notes or keep track of setting information you discover, I heartily encourage that; feel free to contribute whatever you feel like.

To make it easier to create New Campaign pages, I made two templates:

(Note that those templates use squiggly braces { } not square brackets [ ].)

Remember that it's easier to reorganize existing info than to organize non-existing info, so if any of this page-link-stuff confuses you, it would be a better use of your time to just start typing on some existing page and let someone else move stuff around later.

Retrieved from "https://newdawn.fandom.com/wiki/Empire_of_Night:_New_Dawn_Wiki?oldid=2473"
Community content is available under CC-BY-SA unless otherwise noted.